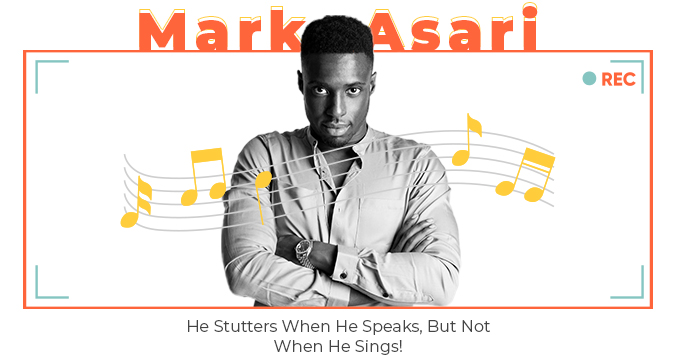 Asari: He Stutters When He Speaks, But Not When Mark He Sings!

Stuttering isn’t bad news as it’s made out to be in the public domain. Believe it or not, the world is teeming with bright and talented individuals who are very gifted and happen to stutter when they speak.

Take the example of Mark Asari. He is a budding singer; his vocal cords produce magic when he starts to croon. There’s ample evidence of this available for viewing on YouTube. Asari achieved sensation status when he took to stage in the 2020 season of the widely popular singing reality show “The Voice.”

Asari, who appeared in the 20th episode of the show, blew the judges’ and audiences’ away with his soul-stirring rendition of the Craig David classic “Walking Away.”

Before the 28-year-old began his performance on stage, his pre-audition interview gave interesting insights into his life, and the ordeals he had to go through because of his stammer. This condition has been a constant in his life ever since he can remember. He describes how his inability to talk fluently led him to become self-withdrawn and shy that he “didn’t talk to anybody.”

Fortunately, Asari’s self-imposed reclusiveness was short-lived. “A big life-changing moment for me was when I found out that, when I sang, I didn’t stutter” he shares, and his eyes light up. The revelation, he adds, has been his savior. He has been fine-tuning his voice ever since. What’s more, he started using his sing-song voice when he interacted with people in his daily life. It made the stutter disappear from speech As a result, he became confident; he felt as if he’d found his true voice, his self!

Post-interview, Asari walks confidently onto the stage, he is all smiles and takes his position. A brief pause, and then Asari’s powerful vocals compel the crowds to cheer on loudly. Even the judges do not hold off for too long, and ultimately press the buzzer, turning around to face the happy-looking singer. Loud cheers and applause follow. Asari recognizes his triumph.

When the jubilant chaos finally settles, the judges proceed to have a chat with Asari. He tries to respond but the stutter tries to overtake him. The judges become curious, and one of them asks “Why do you sing without your condition?”

Asari resorts to the sing-song voice technique to make sure that he doesn’t falter this time. “You use another part of your brain to sing and to talk. Having a sort of rhythm in the voice…gives you something to latch on to.”

“Then we can latch on to it together,” says a judge with a smile.

Asari, the judges, and the audience break into laughter.

Every judge on the panel spells out their love and admiration for Asari’s “phenomenal, smooth and rich” singing and voice.

Asari gets to choose the judge that he would like as his coach and mentor. He sings out the name. Celebrations commence.

It may seem that the Asari who sings outcompeted the Asari who stutters. However, it has been the same Asari every step of the way. Asari won and he will keep on winning. In stage and in life.

There are many inspiring takeaways in Asari’s story. The biggest one is that one should never give up in the face of adversity. Who could have guessed that Asari, who typically struggles to make conversation because of his stutter, actually has a magical singing voice, and rarely hits a bad note? Life is full of surprises, and so are people who stutter. Show them, love, accept them, and surely they will reveal a talented side of theirs that will make you admire and respect them even more!

Stammering: ‘I thought it made me a failure’