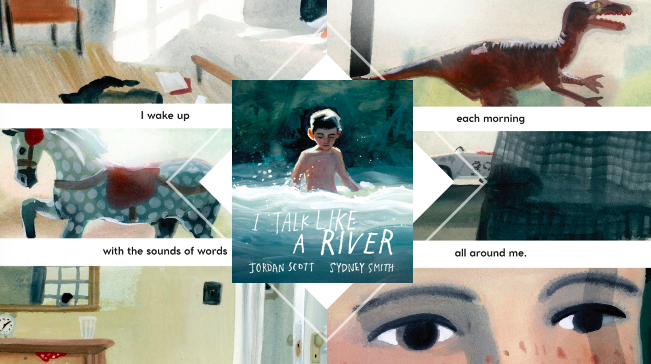 In a Purposeful picture book, “I Talk Like a River,” the Canadian poet Jordan Scott recalls his childhood struggle with stuttering

In “I Talk Like a River”, the Canadian poet Jordan Scott recalls his childhood struggle with stuttering.

The narrator’s anxious relationship with words is brought to life by Sydney Smith’s wonderful illustrations, which, according to Craig Teicher’s review on New York Times” (Nov. 4 2020), “creates a forced kind of, well, social distance (…) using the [water-based] paint’s capacity to spread, bleed, run and dissolve to figure ways speech will run and won’t flow, and how the threat of being cut off can actually distort what the sufferer sees”.

–> “I wake up each morning with the sounds of words all around me.” It is one thing to know these words. To understand what these sounds are. It is another thing entirely to speak them.

–> The boy explains that certain letters in particular can give him trouble. For example, the “P” in “pine tree” might grow “roots inside my mouth and tangles my tongue.” “C” and “M” fare little better.

–> On a certain day, the boy is called to speak in front of the class. By the time his dad picks him up after school, it’s been a “bad speech day”. The two walk along the river and in time his dad tells him that the river’s rolling, breaking, bubbling habits are like his son’s. His son talks like a river. It’s not a magic cure, but it helps. Now, when the boy has trouble, he thinks of it. After all, “Even the river stutters. Like I do.”

At iStutter Center we agree with Bird: “I Talk Like a River could make a significant difference in a kid who stutter’s life. Or an adult’s. Or pretty much anyone’s. It’s just that good”.

Share:
iStutter center participates on the “Global research conference”, an initiative of the National stuttering Association (USA), which takes place from 19-21 november

The story of megan washington: A multi-talented australian singer, who grew up with severe stuttering

There is no limit to what people who stutter can achieve: Congratulations to president-elect joe biden

Next post
There is no limit to what people who stutter can achieve: Congratulations to president-elect joe biden